This is a plugin that allows players to create their own custom characters in game.

This is a plugin that allows players to create their own custom characters
in game.

A menu system in which the player can create a character can be called
upon at any time and assigned to an Actor. Once an Actor has been assigned
a custom character, that character will be used on the map and in side-
view battles.

In order to set up the “generator” pieces, you need to create a new
folder in the “img” folder called “character-creator”.

So the file location should be:

Within this folder, you need 3 new folders:

So these should be located as:

Within each folder, they all need to have the same folders.
Each folder represents a “section” within the Character Creator.

For example, if you created a “head”, “body”, and “feet” folder within
each of the folders of the Character Creator, those would appear as
sections once you placed them in the “Order” Parameter.

I would highly recommend using the sample images provided.

The “Background” image will be used as a background for the character
creator if you choose to use it.

The “CustomCharacter” and “CustomFace” will be used in scenarios where
a custom character’s Character or Face image cannot be loaded.

Finally, the “LoadingResoureces” image will appear to inform the player
that the resources are loading while in the Character Creator.

In order to set up the Character Creator, use the Plugin Command:

Set “actorId” to the Actor ID of the Actor you wish to create images for.

If you wish to have a character’s custom face used in a “Show Text”,
here’s what you need to do:

1) Make sure there is a face image selected for the “Show Text” event.
It can be any face image, it just needs to be there.

2) Use the following notetag in the “Show Text” box:

Set “id” to the ID of the Actor who has the Custom Face you wish to use.

In order temporarily distable the custom images set up for an Actor, use
the Plugin Command:

Of course, simply set “actorId” to the Actor ID you wish to disable
custom character images for.

This would enable the character creator images again. 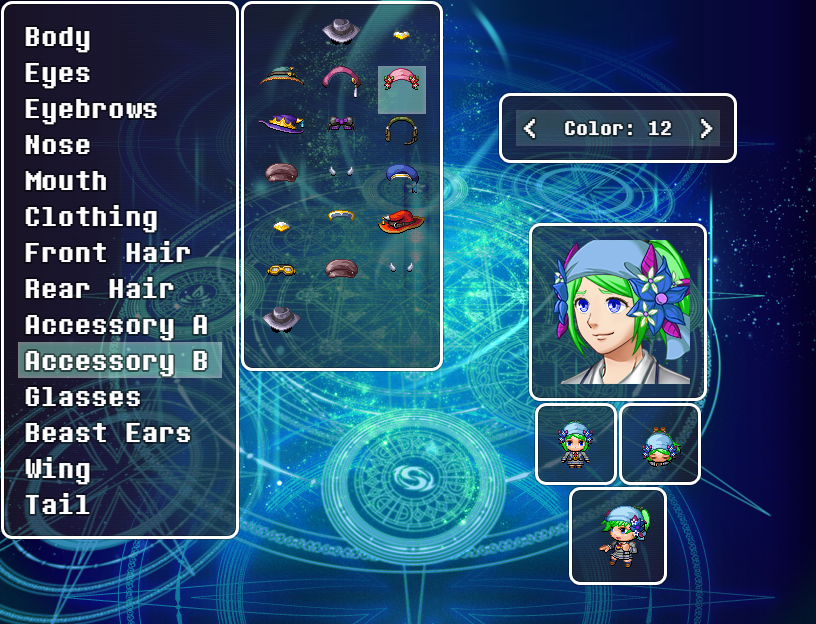